“As the footsteps clank in manacles, or the Chinese prisoners labour, or the Aboriginal prisoners sing and tell stories, they represent the ghosts of real people who lived and worked at the gaol. This production is both a tribute to, and an expiation of, the violent, colourful, sometimes comical or tragic events that took place in the 96 years that Fannie Bay Gaol served as the main centre for incarceration for the law breakers of the Northern Territory” Dr Mickey Dewar – Curator Territory History

When researching this production we realised that Fannie Bay Gaol, now a museum, holds a very special place for the people of Darwin. Almost everyone has a tale to tell about what went on there – many stories were sad and painful, but many were hilarious and evoked the anarchic side of territory life. We took tales from 1886 to 1974 when   doors were opened to release prisoners as cyclone Tracy headed towards the town, and have created a physical show using dance, imagery, giant puppets and live music within the grounds of the former gaol.

“Top End conditions have given the theatrical community the opportunity to raise the bar on outdoor performances. And the latest Business Unusual production –Filling in Time- is no exception. Artistic Directors Nicky Fearn and Tania Lieman take the production to the heart and soul of its subject matter by staging it on-site at Fannie Bay Gaol. Filling in Time delves into the history of the gaol by re-telling stories experienced by the inmates, as well as some of the folklore surrounding the gaol.

The directors have made a smart choice, staging the piece of physical theatre in the grounds. Tall light towers give off the eerie impression of guards watching over you, while the ghosts of days gone by hang in the air. The decision instantly has the effect of immersing the audience into the subject matter, making it easy to digest the story…. The local cast is strong and the brilliant music performed by Melbourne-based Michael Havir and Drum Drum’s Airi Ingram is a highlight. Treat yourself to something different”. 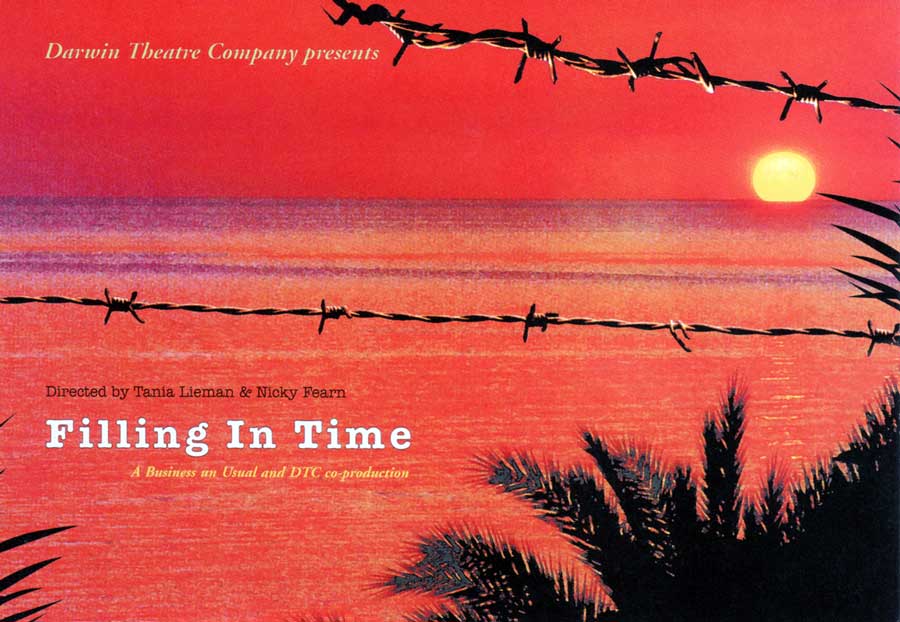