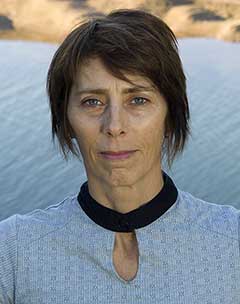 Nicky has worked in professional theatre as a performer, writer, teacher and director since 1980. Nicky specialises in visual theatre using mask, puppetry and text.

She works in the UK regularly with Horse and Bamboo Theatre, one of the UK’s leading mask and visual companies. Nicky performed and devised with the company in Dance of White Darkness 1 and 2, The Girl Who Cut Flowers, Harvest of Ghosts, A Strange and Unexpected Event and Little Leap Forward (winner best play Manchester Royal Exchange 2010).

Nicky toured with Horse and Bamboo for many years on the company’s horse-drawn productions in UK, Europe, Hungary, Slovakia and the Czech Republic.

In 1988 Nicky co-founded Skin and Blisters, a circus-theatre company based in London, blending circus skills, acro-balance theatre and music. Skin and Blisters toured major festivals in Europe and the UK and travelled to Australia to perform at the inaugural Tasmanian Circus Festival in 1992.

Nicky was a co-founding member of Amsterdam-based multi media group Too Much Art (1984-87) which toured Italy, Switzerland and the Netherlands performing music/theatre/installations in public spaces.

Companies she has worked with include UK Company Trestle Theatre (1991-2002), Britain’s leading mask and physical company, where she performed and toured in many of the company’s shows including Island, Beyond the Blue Horizon, Plastered, State of Bewilderment 1 and 2 and Hanging Around.

She studied at Flinders University S.A. and Rose Bruford College, London. She has also trained with Phillipe Gaulier, Theatre de Complicite and with the Italian director Carlo Bosso in commedia d’ell arte. Nicky has a post-graduate diploma in theatre directing from The Victorian College of the Arts.